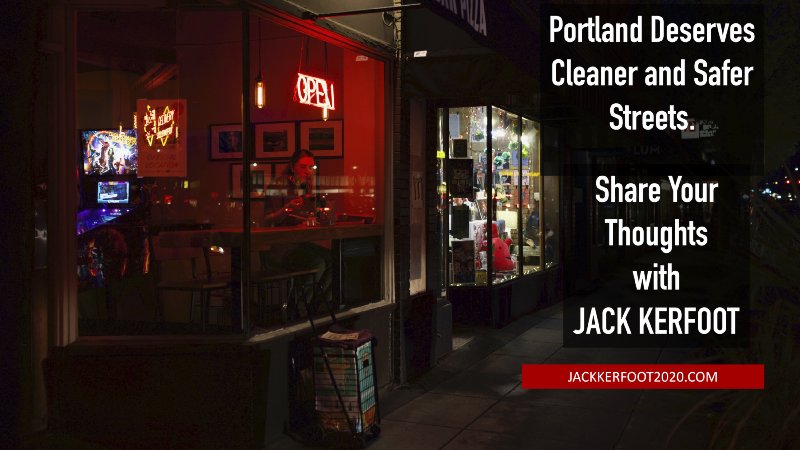 It was an epiphany for Jack. Every day, it was the same stories in Portland, our homeless crisis, violence in the city, shortage of low-income housing, inaction on the city's commitment to climate change, increasing traffic fatalities and questions about city government's fiscal responsibility. It is easy to criticize others, but Portland needs responsible leadership. If not Jack, then who? Jack has decided to roll up his sleeves and try to make a difference. This is Jack Kerfoot.

Above all else, Jack is determined. Determined to overcome prejudice, his humble beginnings and to get an education. Working minimum wage jobs, he saved for college and then served his country with the 101st Airborne Division in Vietnam. Jack says that all veterans will always have a special place in his heart.

Jack graduated with a BSc. in Geophysics when America was struggling with an energy crisis. Oil shortages created long lines at the gas station, double digit inflation and a faltering economy. Going to work in the oil industry was an opportunity for Jack to help his country through an economic crisis.

Jack's determination, technical skills and business acumen took him around the world, working with scientists, bureaucrats and ministers. His work allowed him to pursue his passion for problem solving, collaboration and teaching. Work also provided Jack with the appreciation for the cultural diversity that exists around the world.

A dinner with the late, T. Boone Pickens led to an insightful discussion on global warming and climate change. T. Boone had been in the oil industry for decades but was now committed to developing renewable energy in America.

Jack has come to the realization that our planet's future is in imminent danger, unless we move to clean green energy. It's no longer about politics or environmental theories, it is the harsh reality that if the right decisions are not made now, future generations will suffer dire consequences.

Portland is experiencing the same challenges that many other cities are facing. City policies have motivated Jack to run for Commissioner. Jack believes that helping our homeless requires collaboration with nonprofits, businesses, churches and synagogues along with law enforcement and a tremendous amount of compassion for humanity.

Jack is an outspoken advocate for accelerating the city's reduction in greenhouse gases. He strongly believes in fiscal responsibility and transparency by everyone in government. Triple digit cost overruns are simply not acceptable, and the entire City Council must be held responsible.

Jack is not a politician and not having experience in bureaucracy of government is to the community's advantage. He has managed major operations, negotiations and budgets around the globe. Jack brings over 40 years of business experience to the Portland City Council with a tremendous amount of enthusiasm and only one goal—to serve the residents of Portland.